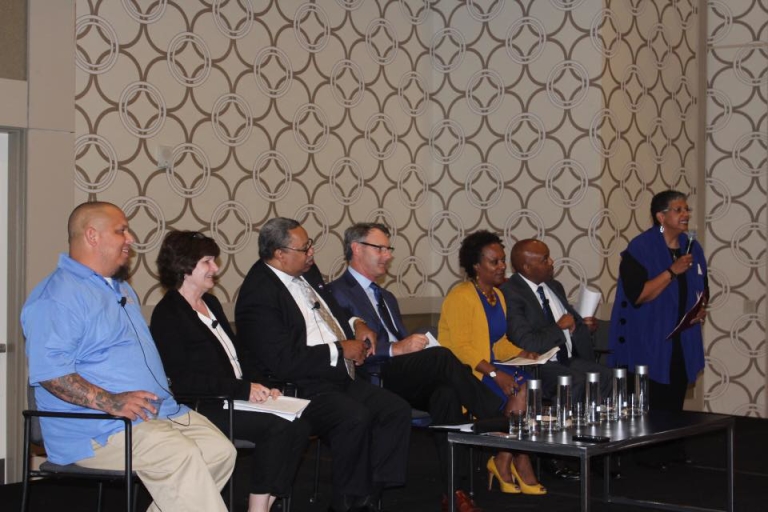 Panel discussion from the 2016 APTA Annual Meeting in Los Angeles, CA on September 12, 2016. The panel was moderated by Dr. Beverly Scott from Beverly Scott Associates LLC. The panel featured:

Before investing in their communities, public transit agencies must ensure that all customers will benefit, transportation consultant Beverly A. Scott said at a Sept. 12 session she moderated, “Transforming Lives and Communities: The Power of Transportation Investment.”

“Just because we make an investment does not mean it will lead to equitable results,” said Scott, chief executive officer, Beverly Scott Associates (People and Communities Matter), and a past APTA chair. “We must ensure that our investments actually ‘lift all the boats’—jobs, healthy outcomes and livable communities.”

“We can create a new middle class through infrastructure building and rebuilding,” he said, citing Kinkisharyo’s construction of a plant in Palmdale, CA, to build railcars for LA Metro and sending employees to Japan to learn skills.

“This is not a social program, it’s an economic development plan,” he added.

Patrick J. Scully, member of the APTA Executive Committee, outgoing chair of the Business Member Board of Governors and executive vice president, sales and marketing, Motor Coach Industries, recognized bus and rail manufacturers for “a good job creating jobs for the communities they serve.”

He warned, however, that communities and companies must make sure one region’s new jobs don’t come at the expense of another.

“The U.S. was ­hemorrhaging jobs as the economy became more global,” he said. “How do we bring those jobs back? How do we do it and provide inclusion? We need to provide pathways to long-term sustainable jobs.”

Kristian Mendoza, an employee of the Kinkisharyo railcar plant mentioned by Washington, said he had been unemployed for two years after leaving the U.S. Marine Corps when the manufacturer contacted him.

“Workers at the plant can take care of their families and work close to home. That makes the American Dream a reality,” he said.

Elizabeth Bunn, organizing director, AFL-CIO, cited the importance of the U.S. Employment Plan, created by the Jobs to Move America coalition and approved by DOT, in building and rebuilding an infrastructure workforce.

This year, the American Public Transportation Association (APTA) Annual Meeting was held in Los Angeles and Jobs to Move America played an important part, co-organizing a symposium with LA Metro and APTA entitled “Transforming Lives and Communities: The Power of Transportation Investment.” Leaders from public transit agencies, labor, business, philanthropy and community-based organizations shared their perspectives on how transportation investment can be a catalyst for growth, access and transformation for the 21st century and beyond.

We also teamed up with LA Metro and the Chicago Transit Authority to organize a U.S. Employment Plan workshop for agencies interested in adopting the employment plan.

Your ticket for the: APTA Annual Conference 2016: “Transforming Lives and Communities” Panel